The 84th Academy Awards on Sunday, February 26, 2012 saluted Old Hollywood glamour with both the men and women swathed in the finest apparel strolling down the red carpet.  Billy Crystal, hosting for the ninth time, was wonderfully witty, gracious and funny with the backdrop of the Kodak theatre designed as retro Old Hollywood.   The ten Oscar worthy films embraced a variety of themes including the history of film making combined with drama, cinematography brilliance in sets, visual effects and all were entwined with captivating stories winning the hearts of the audience.

The fashion for the evening was comprised of Old Hollywood glitz  with snowy whites and frosty creams, glitter, pops of color, decadent black, vivid reds and embellishments with jewelry showcasing elegant fashion. The red carpet theme was a flashback to yesteryear and those participating relished the occasion and dressed to impress with elegance and grace.  Everyone looked smashing brilliant.  The film, The Artist, stole the show winning Best Actor, Best Director and Best Movie.   Yes, Old Hollywood glamour was on the red carpet in 2012.

Gwyneth Paltrow “Snow White Perfection” Paltrow was statuesque in a sleek white Tom Ford confection with a draping cape.  The hair, makeup and minimal jewelry completed the ensemble.  Paltrow owned the night and was nominated “best dressed” by many for the sheer Old Hollywood apparel glamour.   The red carpet easily framed this beauty and combined with the winning smile and grace Paltrow was  “The Lady in Waiting” for the evening. 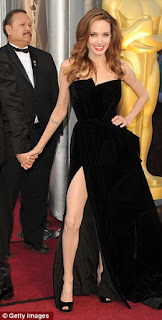 Angelina Jolie:  "Goddess of Hollywood - Love me, Love me not" Angelina Jolie sashayed down the red carpet in a black velvet Atelier Versace gown with a thigh high slit, long curled hair, red lips and a riveting smile. Reporters, cameras and viewers reacted in a crazed frenzy of excitement. The entrance with Brad Pitt and his parents was indeed a sight to behold. After months of being berated as boringly dressed for award affairs, Jolie glammed it up and posed with a leg strategically placed.  And, the smile sent a thousand words that Jolie was dangerously back.  Instead of a vile of blood, a leg made the entrance that went viral on the Internet.   Of course, Jolie a gorgeous beauty, is too thin.   However, the entrance and presenting an award with “the pose” was pure Jolie that will not be forgotten.  People with substance and fortitude can evolve, can change, can wipe the slate clean of one’s past.  Jolie is indeed making a difference with humanitarian efforts worldwide, raising six children, three of them adopted and in a seven year relationship.  On the day after the Oscars when tongues were wagging on Facebook, Internet and television worldwide - Jolie was casually seen shopping with future, mother-in-law, Jane Pitt enjoying life.  It was reminiscent of Rhett Butler, saying to Scarlett O’Hara in Gone With the Wind, “Frankly, my dear, I don’t give a damn”.