Reading has always been a form of escape, a form of increasing knowledge, a form of understanding history and most importantly a path to intellectual discourse.   When the world becomes a scene from Alice's Adventures in Wonderland by C.S.Lewis a novel can remove the reader from daily activities and drop one into another era, another world while opening doors of creativity and intelligent thinking.  Fiction can expand the mind about a locale a country or a time reminding us of moments in world history or that the human sensitivities of man never seems to evolve.  The circle keeps revolving though man desperately tries to not allow the repetition.   Reading is a pleasure to all and those who partake in this indulgence are free to recognize the pitfalls and happiness of humanity.

Enjoyment of reading is the ultimate goal. The satisfying pleasure of finishing a novel and to continue thinking upon the work is indeed profound.   A gifted author can bring joy, laughter, insight and can paint images with words.


"Begin at the beginning," the King said, very gravely, "and go on till you come to the end: then stop."  - Lewis Carroll, Alice in Wonderland

- Novels All Linked to Amazon

- Warby Parker Readers or Prescription! Check Out! Try on at Home!

1.  The Goldfinch - Donna Tartt (Pulitzer Price for Fiction 2015):  The novel is a page turner from start to finish.  The story line between Theo, his mother, father, Boris, The Barbours and Hobie was interwoven with several different tales all becoming one. And the famous painting, The Goldfinch (Dutch painting 1654 by Carel Fabritius of a chained goldfinch) acquired haphazardly by Theo from the bombing of the Metropolitan Museum of Art is the puzzle piece that keeps every thread of the story intact.   The tale is a whirlwind of motion from a terrorist act culminating in a loss of a parent, living with The Barbours, developing a love of furniture, living in Las Vegas with a gambling dad, drugs, meeting best friend Boris then back to New York and ending in Amsterdam kept one turning page after page.  Even though the novel is almost 800 pages, a reader is transfixed and obsessed with finishing this well written and spell binding work of art.

Additionally, The Goldfinch, emphasizes how it takes a village to raise children and that there are people with caring hearts who will help one if the person notices the open door.  The ending wraps up like a Hollywood movie yet it completely thought provoking and unforgettable.  Yes, The Goldfinch is destined to be a movie.  John Crowley, director of Hunger Games, True Detective, Brooklyn are at the help of turning this novel into film.   Do not miss devouring this exceptional and drama filled tale.

"The Goldfinch is a rarity that comes along perhaps half a dozen times per decade, a smartly written literary novel that connects with the heart as well as the mind...Donna Tartt has delivered an extraordinary work of fiction." - Stephen King, The New York Times Book Review


2. The Lake House: A Novel:  Kate Morton (2016):  The Lake House: A Novel is a suspenseful thriller that keeps the reader guessing until the last page.  Alice Edevane at sixteen has an enchanted childhood with descriptive visions of Downton Abbey coming to mind.  On one summer's eve night after a beautiful party with hundreds of guests everyone learns that the youngest son, Alice's baby brother Theo has vanished without a trace.  The mystery is never solved until decades later when Sadie Sparrow, a detective in London, on a forced holiday vacation, finds the old Edevane estate hidden among the brambles and vines and is intrigued to undercover what happened. Eerily everything within the house has remained the same for decades since the life altering disappearance.

Flash forward to the present time Alice now in her twilight years, a famous novelist, is not too keen on having Sparrow show up on her doorstep asking questions.   The story is lush with twists and turns, private secrets that entwine all the characters together in a satisfying finale. 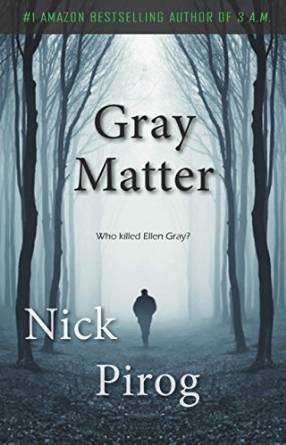 
3.  Gray Matter - Nick Pirog (2010):  The novel is based in the Northwest and is a fast paced read that keeps the reader on the edge of their seat.  It is difficult to put down because just who did kill Ellen Gray?  The story begins with Thomas Prescott who spontaneously moves from the east coast to the west coast on whim after a difficult breakup.  Of course, Prescott is moving home to his empty childhood house on Magnolia situated on the bluffs above Puget Sound.  His parents had died a decade earlier and the house had remained empty.  Starting over in a new place becomes an adventure when he finds a body floating int he cove below the estate.  It isn't just any woman - it is the Governor of the State of Washington - Ellen Gray.   The story unfolds from one catastrophe event to another keeping the pages turning with anticipation.

Every episode leads to believing in a possible killer.  Pirog is an excellent story teller from start to finish.  This is a self-published work rather than a literary piece with all the i's dotted and t's crossed. There are a few grammatical errors and also incorrect notes such as Bill Gates living on Mercer Island.  Perhaps this was intentional? All and all a lively murder mystery that keeps the reader entranced and wanting more until the last page.


"If one cannot enjoy reading a book over and over again, there is no use in reading it at all."  - Oscar Wilde

Enjoy the beauty of fall.  Light a fire, watch the leaves fall in the morning, be curious and open the mind to novels that entertain, relax all the while learning about a place or time.  Never forget the fate of others, muse over the similarities and note the circle of life.