January 18, 2012
The 69th Golden Globe soiree was attended by the Hollywood elite draped in fashion hues from snowy winter white, creamy nudes, skin tone blushes, vivid reds, electric yellows, deep blues and emerald greens. Many gowns were form fitting with fishtail hems, off the shoulder and in satin and frothy fabrics with perfect hair and makeup. The men wore midnight blue and black tuxes with Colin Firth taking the lead on men's fashion.   There were a few mishaps such as Johnny Depp and Madonna with a creative dress and overly buffed arms, yet both had taken care in planning the quirky looks. Most were stunning: Octavia Spencer, Emma Stone, Kate Beckinsale, Shailene Woodley, Stacy Keibler, Jane Fonda and Helen Mirren.  A star studded night with the Hollywood finest dressed to the nines celebrating and showing respect for fellow artists and the Hollywood Foreign Press.  Why not have fun and dress up!

Director Angelina Jolie:  "In The Land of Blood & Honey”   Stop the press, stop the commentary for The Red Carpet Queen has arrived.  Jolie stepped out of the limo and onto the red carpet, in a Versace white satin gown with a red sash at the throat, red lips and matching clutch.  All eyes were riveted, mouths dropped open in silence and then unanimously cheered.  A true movie star floated down the red carpet, captivating attention along with leading man, Pitt.   The white satin, red accents, hair and catlike makeup showed the world that Jolie is indeed the most gorgeous women alive in 2012.   Every commentator on the television after shows was struck by Jolie's breathtaking beauty.  This year, as a director, for In the Land of Blood & Honey the color of this gown fit aptly – Blood & Honey.   Jolie’s grace in presenting, talking with commentators and focusing on Pitt was ladylike Audrey Hepburn.   Jolie always makes an entrance and is always unforgettable.  Pitt and Jolie are the King and Queen of moment for film and for humanitarian efforts.

Forever Chic Style -  The Frumpy Frog Queen
A visual mess, no respect for event, self or others. So not Audrey.  For shame.

Meryl Streep: "Cowgirl of the West” Meryl Streep, once again, won the Best Actress in Drama for The Iron Lady. Streep,in shock,  had hoped that Viola Davis, The Help, would win.   Streep wore an ugly black sack with messy hair, glasses and hands in pockets signaling  The Frumpy Frog Queen.  Obviously, little thought or care was given to dressing for the evening. Did Fonda, Mirren, Close or even Maddona, in a festoon of oddity, think to not play the game?  Meryl, " Do the leading men in Hollywood such as  Nicholsen, Warren, Connery, Poitier and on this night - Freeman, when on stage appear in ill fitting clothing?" Answer:  Never. What an affront to fellow thespians.  And, swearing on the stage?  Where is the respect for the industry? For the Oscars, hire a fashion consultant - perhaps Rachel Zoe.  Davis, give Streep a run for victory in February at the Oscars. 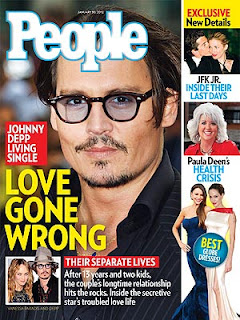