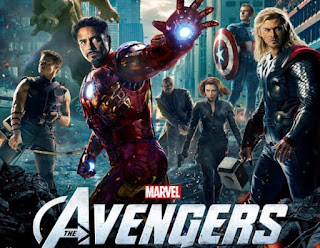 The Avengers released on May 4, 2012  and has grossed worldwide $1,305,600,000 within 32 days.  This action packed film currently stands  as the #4 film of all-time globally in sales. #3 is Harry Potter and the Deathly Hallows Part 2 which stands at $1,328M.  Why the fast and furious movie goer demand for The Avengers flick starring:  Iron Man, Downey Jr., Captain American, Evans, The Hulk, Ruffalo, Thor, Hemsworth, Hawkeye, Renner, Loki, Hiddleston?  The answer is simple - audiences crave being entertained with captivating actors, action packed drama, mesmerizing special effects, witty dialogue and a story that captures imaginations.  The Avengers, is this film from the opening scene to the earth shaking finale.

The story begins with Nick Fury of  S.H.I.E.L.D. creating a team of humans with super powers to form a group called The Avengers.  The goal is to save Earth from the evil Loki and his army. Set in New York, the story touches on good versus evil, brother against brother, ego versus ego and working solo versus winning together as a united front.   Fans of Marvel comic books and recent summer block buster Marvel movies will not be disappointed.  The Avengers is one film not to miss this spring and summer 2012!

Note: Sit through the credits for a funny scene.  Acting!


"Every time I go to a movie, it's magic, no matter what the movie's about".
--Steven Spielberg